Is That My Name on the Cover?

A writer I know developed something she calls Writer Bingo, where she made up a Bingo card where each square has something she considered an important or desirable writing milestone.  It might include things like “first personal rejection” to “first invite to submit a story” to “win the Hugo.” It’s a fun way to develop and track writing dreams and goals, progress, and success.

I never developed my own Writer Bingo card, but if I had, one of the squares would have been “get my name on the cover of a magazine.”  To me, getting your name on the magazine cover is a big deal because it’s those names that help sell the publication.  Those are names that catch people’s eye and make them pick up the magazine  (and possibly help them decide to buy it).  Usually it’s names people know because those are the ones that sell. 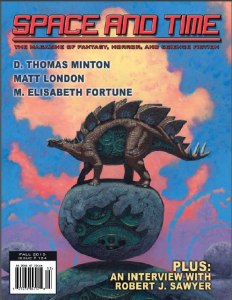 When I was writing my previous post about the inspiration for my story “From the Darkness Beneath,” I noticed that my name was on the cover of Space and Time magazine.  I actually did a double take.  Yup, there it was, right at the top under the magazine title.  This isn’t actually the first time I’ve made a cover—I was on the inaugural cover of Kasma SF—but it’s the first time I’ve made an actual print magazine cover that contained several stories and which has been around a long time (Space and Time was founded in 1966).  That may sound like splitting hairs, but to me it’s not.

Writer of speculative fiction
View all posts by D. Thomas Minton →
This entry was posted in Goals, Inspiration and tagged From the Darkness Beneath, Space and Time. Bookmark the permalink.