Last week, I posted part one of my interview with author Marc Schuster in which he discussed his forthcoming book, The Grievers.  Today Marc discusses his approach to and thoughts on the craft of writing.  Marc has also agreed to stop by periodically and answer readers’ questions as part of a “comments interview,” so leave any questions or comments you might have as comments on this posting and Marc will likely respond—how’s that for cool? 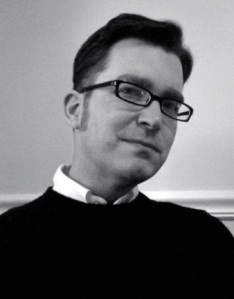 I first became aware of Marc Schuster’ website and writing several months ago, and his work has quickly become a favorite of mine.  In addition to his wickedly funny website, Abominations, Marc is the author of several books, including The Singular Exploits of Wonder Mom and Party Girl and The Greatest Show in the Galaxy: The Descerning Fans Guide to Doctor Who (with Tom Powers).  His short fiction has appeared in numerous magazines and journals ranging from Weird Tales to Reader’s Digest.  I had a chance to read an advanced copy of his forthcoming novel, The Grievers, and found it to be one of the funniest and most touching books I read in 2011.

You have a talent for voice, both the in the short form and at novel length.  How do you find and develop a character’s voice?

M.S.:  Most of the time, it’s a matter of tapping into a particular aspect of my own personality and taking it in a new direction.  Usually, it involves looking at my own foibles and figuring out how to turn them into characters, or at least to place them at the heart of specific characters.  My tendency to turn everything into a joke, for example, lent itself nicely to the character of Charley Schwartz in The Grievers, whereas my innate sense of insecurity led to Audrey Corcoran in The Singular Exploits of Wonder Mom and Party Girl.  In terms of my shorter work, my lifelong desire to find a place in the world and be more comfortable with myself fed into the narrator of “My Life as an Abomination.”  I suppose everything starts with insecurity and builds from there.  I’m just channeling it and examining from a new angle with each new project.

You write both short fiction and novels.  Do you prefer one form over the other?  Do you go about the craft of writing short fiction differently than you do novels?  If so, how?

M.S.:  I’m nothing if not long-winded, so I gravitate toward the novel.  I also think the novel gives me more room in which to explore ideas, more opportunities to experiment.  I like to think of the novel as a large canvas, and because the canvas is so large, I can do things in a novel that I can’t in a short story.  Take some time to develop back story, for instance.  Or build more slowly to a climactic moment.  With short fiction, I usually have a beginning, middle, and end in mind when I set off to start the project.  With a novel, I usually just have a premise.  I’ll start with a “what if” scenario, and keep writing—often hitting a multitude of narrative dead-ends—until I reach a satisfying conclusion.  This is probably another reason I prefer novels.  I’m far too disorganized in my approach to writing to craft a tight short story.  Organization is something I impose on a manuscript later in the writing process.  For me, revision is where the real work happens.

You teach writing in college.  What is the most common weakness you see in the stories of aspiring writers, and how do you help them improve it?

M.S.:  One major problem is a tendency toward cliché.  The reason for this, I think, is that many of my students haven’t read much, and a lot of the tropes they pick up are from television.  As a result, their characters are a little thin, and plot lines feel like they’ve been lifted directly from other sources.  The best way to deal with that kind of writing is recommend books and writers that might be in line with what my students are trying to accomplish.  One thing to keep in mind, of course, is that we live in a culture that doesn’t really encourage or value reading.  Within the demographic that my students inhabit, someone who knows what happened on the most recent episode of Keeping up with the Kardashians will do better socially than someone who’s read Lolita.  The most important thing I can do in many cases is to put books in their hands and show them how to turn the pages.  Or at least how to advance from one screen to the next on their e-readers.

Every writer writes differently: some write only after developing extensive outlines (plotters), others write by the seat of their pants (pantsers); some write quickly, others agonize over ever word and comma.  What kind of writer are you?

M.S.:  I’m definitely an agonizer.  In some ways, it puts me at a distinct psychological disadvantage during National Novel Writing Month.  I’ll see my friends post massive word counts—thousands of words a day—and then I’ll look at a sentence I’ve been worrying into oblivion over the course of several hours and start to feel bad about it.  I’m exaggerating a little bit here, but not much.  Some days, I’m happy just to get a few sentences out.  And the big irony of it all is that I’ll frequently end up cutting a majority of the material I agonized over once I start the revision process.

If you could improve one thing about your writing, what would it be?

M.S.:  I’d like to be a more daring writer—to try new things, or to write without worrying about offending people.  To an extent, I think I’m far too polite and perhaps too squeamish as a writer.  I could also stand to be a lot more disciplined in my approach to writing.

Seven Quick Questions (a.k.a. The Lightning Round)

(1) If you could get anyone to write a blurb for one of your books, who would it be?

(3) Which Doctor is your favorite Doctor?

(4) What software (if any) do you use for your writing?

(5) If you had a chance to ride a Russian rocket into orbit (with the very real risk you might not come back), would you do it?

(6) What grammar rule, when broken, bothers you most?

I’d like to thank Marc for being a good sport and sitting for this interview.  For more information about Marc and his fiction, visit his website, Abominations.  Marc’s books are available for purchase or, in the case of the The Grievers, pre-order at Amazon.com.

Also, if you any questions or thoughts to share with Marc about his fiction or writing in general, just leave them as comments on this post.  Marc will be dropping by periodically to respond to comments, and I’m sure he’d like to hear from you.

Writer of speculative fiction
View all posts by D. Thomas Minton →
This entry was posted in Writing and tagged Interview, Marc Schuster, The Grievers, Writing Craft. Bookmark the permalink.