Marc Schuster may not be a household name (yet), but he should be.  I first came across his fiction and website a few months ago, and I have since become a fan of his work.  Marc is an observant, funny, and extremely talented writer, and everyone should be reading his fiction.  When he approached me a few weeks ago with an offer to read his forthcoming book, The Grievers, I couldn’t pass it up.  Marc was also kind enough to submit to an interroga—err…interview.  This is part one of my two-part talk with author Marc Schuster about his forthcoming book and his approach to writing.

Marc, before we get down to business, can you tell me something about yourself?

M.S.:  By day, I’m a teacher. By night—well, I’m still a teacher. Most of my time, actually, is taken up with teaching.  Not that I see this as a problem.  I love teaching.  But when I’m not teaching, I’m writing: fiction mostly, but I’ve also been known to offer commentary on popular culture and to review books at Small Press Reviews, a blog I started in 2007.  My first book was a critical examination of Doctor Who called The Greatest Show in the Galaxy.  Since then, I’ve branched out into fiction with two novels, The Singular Exploits of Wonder Mom and Party Girl and The Grievers, which will be available in May.

Book blurbs are nice, but how would you describe your new book, The Grievers?

M.S.:  I’ve been telling people that The Grievers is a coming of age novel for a generation that’s still struggling to come of age.  It’s about a group of friends who went to high school together and now have to come to grips with the suicide of a fellow classmate.  At the same time, they’re also dealing with the fact that their alma mater is using the tragedy to turn a fast buck.  I was lucky enough to have a few of my favorite writers offer advance praise for the book.  My friend Kelly Simmons wrote that it reads “like a romp on a dark path somewhere between Dead Poet’s Society, Rushmore, and Office Space.”  I think that about sums it up.

The Grievers deals with the very serious issue of coping with the guilt of a friend’s suicide, but it is also a very funny book.  How did you manage to walk that fine line of being humorous-yet-sensitive while not turning a serious topic into a crass joke?

M.S.:  A huge part of it, I think, is never making the suicide itself into a joke.  Billy Chin’s death is what triggers all of the other events in the narrative, and though I made fun of everything else while I was writing the novel, I kept Billy’s tragic demise off limits.  One major reason for this is that Billy is based on a real person.  A friend of mine did, in fact, commit suicide when I was about Charley’s age.  The novel is a work of fiction, but writing it was, in some ways therapeutic, a way of working through my sadness and rage.  I knew all along that I’d be dedicating the novel to my friend, and I was very aware that people who knew him would likely be reading it.

Intentional or not, characters in fiction almost always contain traits or personal experiences of the writer.  In The Grievers, how much of you is in the main character and narrator Charley?  Are any of Charley’s humorous, yet embarrassing stories yours?

M.S.:  Probably more than I should admit.  The more sentimental passages are actually closer to real-life experience than the humorous ones.  About halfway through the novel, Charley starts to get a little misty about a time when he and his buddy, Neil, offered to drive a couple of—hmm—women of the night home after a barroom brawl.  That really happened, or something quite like it.  There was also a bit of silliness with a poster for a production of Bock and Harnick’s musical Fiorello! when I was in high school. But that’s about all I can divulge at the moment.

Writing humor is subjective and difficult, especially to make it look natural and effortless.  In The Grievers, you  manage to do both.  Are you naturally a funny person, or do you have a secret to writing humor (assuming you want to share it)?

M.S.:  I like to think of myself as a naturally funny person, though my students might beg to differ.  In writing, I think, the real trick to being funny is just being observant—and watching out for the bizarre things that occur in everyday life.  For example, Charley’s main source of income in The Grievers is a job that involves dressing up as a giant dollar sign.  I didn’t make this up and probably couldn’t have if I tried.  Though I never had the job myself, a bank in my neighborhood used to employ an actual human being to walk back and forth across the lawn dressed as the bank’s logo, a giant red letter C.  All I did was change the letter C into a dollar sign.  The rest was just the modern world going about its business of being a ridiculous place to live.

The Grievers is ultimately a coming of age story.  What is it about this type of story that seems to appeal to readers?

M.S.:  The main reason I like to read coming of age stories is that I’m always wondering when it’s going to happen to me—and whether I’ll recognize it when it does happen.  Maybe the real attraction to coming of age stories is that they’re somewhat of myth.  Most people probably don’t have a single moment or episode in their lives when they realize that they’ve become adults.  Really, it’s the accumulation of experiences that turns us from the children we used to be into the grownups we are today.  But the coming-of-age story allows us to imagine we can pinpoint the exact moment the change happened.  And by imagining that moment, we can draw a clear boundary between our days of innocence and our days of experience—cordon off the innocence with bright yellow police tape, as it were, and protect it, if only in our memories.  There’s something beautiful and nostalgic about that myth, something very attractive.

Phil Ennis, a high school biology teacher, made a lasting impact on Charley.  You also teach (albeit at the college level, and hopefully better than Phil Ennis).  Were there any teachers who helped shape who you are today—either positively or negatively—both as a person and a writer?  If so, how?

M.S.:  So many!  One of the best teachers I ever had was Al Vernacchio.  He was my English teacher when I went to Saint Joseph’s Prep, and he was the first person to really encourage me to keep a journal.  He was also one of the first teachers I ever had who treated me like a person—as opposed to some kind of defective creature that needed to be fixed in some way.  I think the problem with a lot of teaching is that it assumes a massive degree of ignorance on the part of students, and that’s insulting to everyone involved.  What Al Vernacchio taught me, more than anything, was that I had something worth saying, that everyone has something worth saying.  That attitude encouraged me to become a writer, to slog through the years of rejection and to improve my craft to the point where the things I had to say were effectively complemented by the voice I found for saying them.  It’s something I strive for as an English teacher today—engaging my students in a dialogue of equals and encouraging them to see themselves as thinkers, as people with something worth saying.

Seven Quick Questions (a.k.a. The Lightning Round)

(1) If you were casting the role of Charley for a movie version, who would you want for the part? 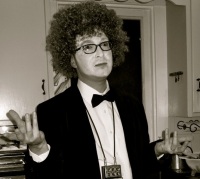 (3) Have you ever worn a giant foam dollar sign costume or other equally absurd costume (if so, what was it)?

M.S.:  Sadly, no. But I’ve been known to impersonate Malcolm Gladwell on a regular basis.  It’s a sad, sad life I live.

(4) The Grievers is set in your hometown of Philadelphia.  How many times have you visited the Liberty Bell?

M.S.:  All Philadelphians are legally required to make at least one pilgrimage to the Liberty Bell on an annual basis.  Dispensations are granted to the elderly and infirm.

(5) What is your favorite place to get a cheese steak?

(6) Have you ever stripped wallpaper and is there an easy way to do it?

(7) If you were the bastard child of two people or things, who or what would they be?

I’ll post part two of my talk with Marc Schuster next week.  In the meantime, check out Marc’s website and short fiction, or better yet, read his first novel, The Singular Exploits of Wonder Mom and Party Girl.  And don’t forget to pre-order The Greivers; you won’t be disappointed.

Writer of speculative fiction
View all posts by D. Thomas Minton →
This entry was posted in Writing and tagged Interview, Marc Schuster, The Grievers. Bookmark the permalink.

4 Responses to Inteview: Author Marc Schuster Talks about The Grievers